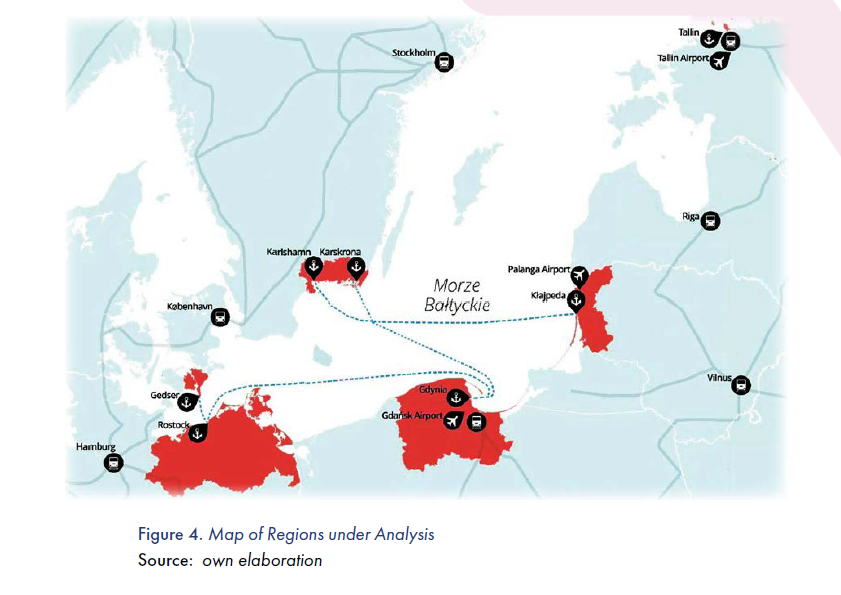 MAP OF REGIONS UNDER ANALYSIS

DESCRIPTION OF REGIONS UNDER ANALYSIS 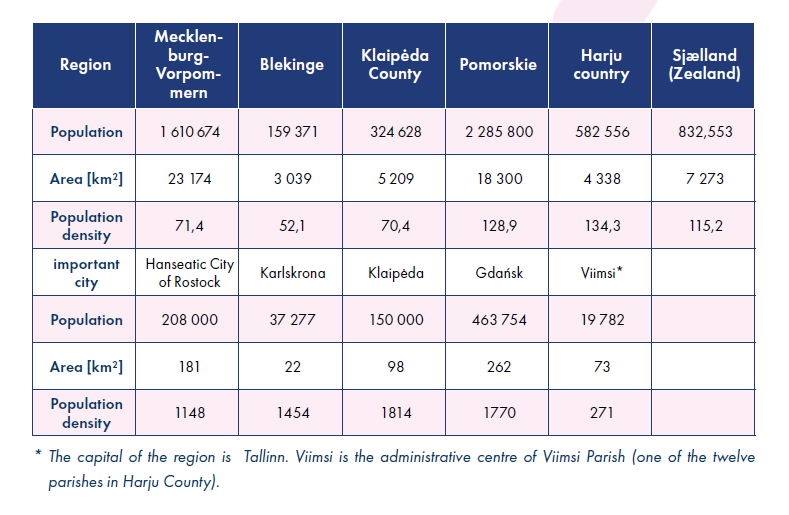 ROSTOCK
Located in north-eastern Germany. It is the largest in terms of area and number of inhabitants city with county status in Mecklenburg-Vorpommern state. Rostock is the largest Baltic Sea port in Germany (28.8 million tons of goods were handled in Rostock in 2017). From its ferry terminal several companies provide high-frequent passenger transport services e.g. to Denmark (Gedser) with up to 11 departures a day and Sweden (Trelleborg) with up to 6 daily trips. In 2017 5,281 ferries from Scandlines, Stena Line and TT-Line called Rostock carrying ca. 2,215,000 passengers in total between Rostock and Scandinavia. The City of Rostock and its seaport are integral part and important node of the ScanMed as well as EastMed-TEN-T core network corridor. To the south-east of Rostock, 28 km away
there is also Rostock–Laage Airport which handled ca. 290 thousand passengers in 2017.
The airport manages flights, first of all, to Munich and Nurnberg and charter flights to the south of Europe.

REGION BLEKINGE
One of 21 Swedish administrative regions and the second smallest (after Öland) in terms of the area from among 25 Swedish provinces. The region of Blekinge is located in the
South-East of Sweden along the Baltic Sea and covers 3.055 km² (only 0.7% of the total area of the country) and is inhabited by ca. 160 thousand people. The capital
of the region is Karlskrona inhabited by ca. 37 thousand people. The city located on over 30 islands has all-year-round ferry connection with Gdynia managed by Stena Lina ferries.
It is also situated on E22 highway from Malmö to Norrköping.

KLAIPEDA COUNTRY
Area of 5209 km² situated in western part of Lithuania, between Latvia and the Russian Kaliningrad Oblast. One of the ten counties in Lithuania. The capital of the region is the third largest city in Lithuania - Klaipeda. Thanks to close vicinity of the Baltic Sea, in the region there is the largest container port in Lithuania and ferry seaport. Regular ferry service is provided between Klaipeda and Kiel (Germany) and Karlshamn (Sweden). In Klaipeda there are also two ferry ports connecting the city with the Curonian Spit. The Old Ferry port handles only pedestrian and bicycle traffic, whereas the New Ferry port is also used to transport vehicles. Klaipeda is perceived as the Lithuanian transport hub connecting sea, road and rail transport.

POMORSKIE
One of the 16 Polish (one of three located at the Baltic Sea). The Pomorski in inhabited by ca. 2.3 million people, which constitutes 5.8% of the Polish population.
The centre of the region and also the northern part of Poland is Tricity agglomeration comprising Gdansk, Sopot and Gdynia. The capital of Pomorskie and the largest city is Gdansk with 464 thousand inhabitants. Pomorskie is an integral part of the Trans-European Transport Network (TEN-T). In the Pomorskie there is the northern part of the Baltic-Adriatic Corridor, one of the nine main transport corridors of the TEN-T network, connecting the Baltic Sea with the Adriatic.
In the Pomorskie there there is Lech Walesa international airport which handled over 4.6 million passengers in 2017; there are also two seaports in Gdynia and Gdansk, one of the largest facilities of such type in the Baltic Sea region. They handle almost all types-of cargo and ships, and provide regular ferry services to Nynäshamn (Sweden), Karlskrona (Sweden), Helsinki (Finland) and and Hanko (Finland). The geographic and market-related position of seaports in Gdynia and Gdansk qualifies them to play the role of distribution and logistics centres within the Baltic Sea region and countries of the Central and Eastern Europe.

VIIMSI MUNICIPALITY
Municipality in northern Estonia located in Harju province. The capital of the region is Tallinn. Viimsi is the administrative centre of Viimsi Parish (one of the twelve parishes in Harju County),situated 11 kilometres north from Tallinn, on the coast of Baltic Sea. The region covers 73 km² and is inhabited by 19 387 people. Twelve kilometres from Viimsi there is Port Muuga, the largest Estonian freight and passenger port in the Baltic Sea region. In Tallinn there is also the largest Estonian airport handling over 2 million passengers every year.

GULDBORGSUND
One of the 98 Danish municipalities, located within the Zealand region. Guldborgsund Municipality covers 903 km2 and is inhabited by ca. 61 thousand people. The main city of Guldborgsund Municipality is Nykøbing Falster inhabited by nearly 20 thousand people. The railway station situated in Nykøbing Falster provides railway services e.g. to Copenhagen and Hamburg. Two European transport corridors go through the municipality; E55 towards Rostock, Berlin and East Europe and E47 toward Hamburg and West Europe. The nearest Lolland-Falster Airport is located 35 km from Nykøbing Falster in Lolland. It is the only international airport south from Roskilde. On the island of Falster in Gedser there is also ferry terminal handling car ferries to Rostock (Germany). 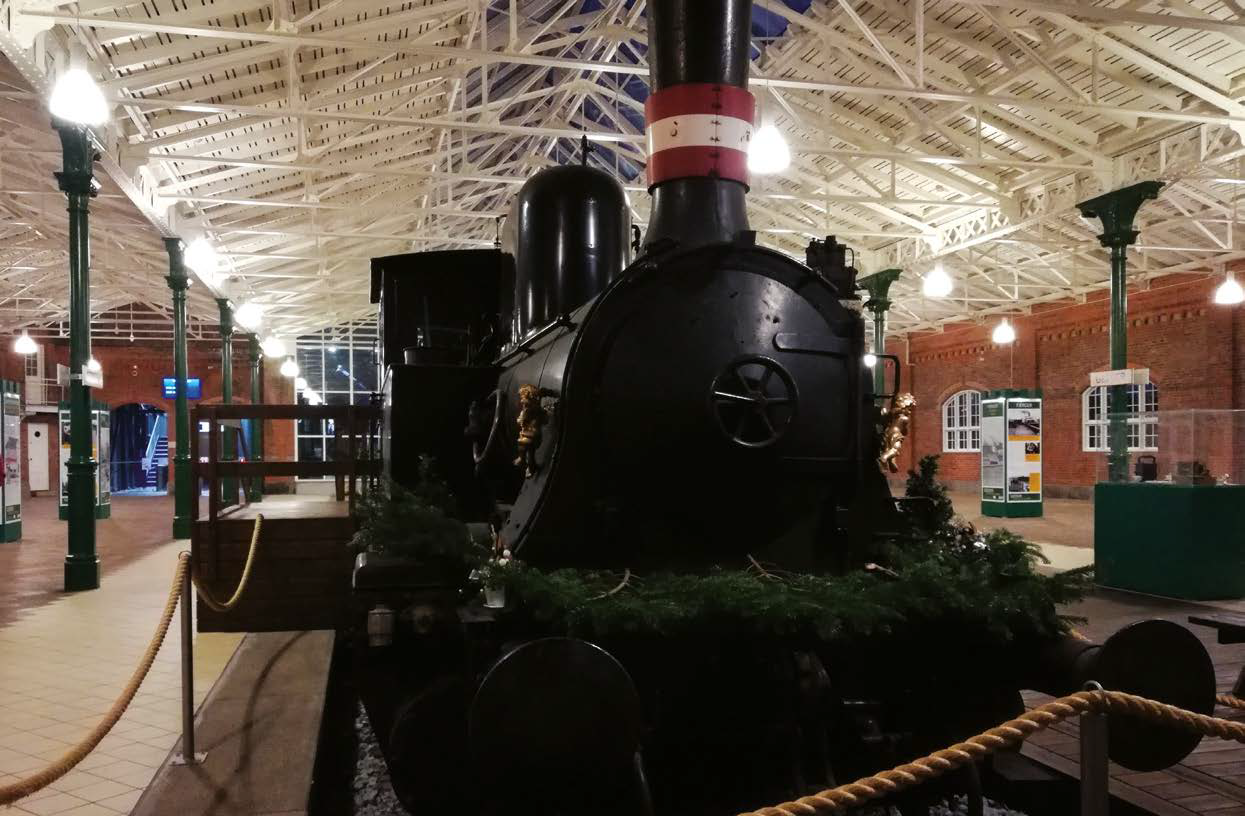