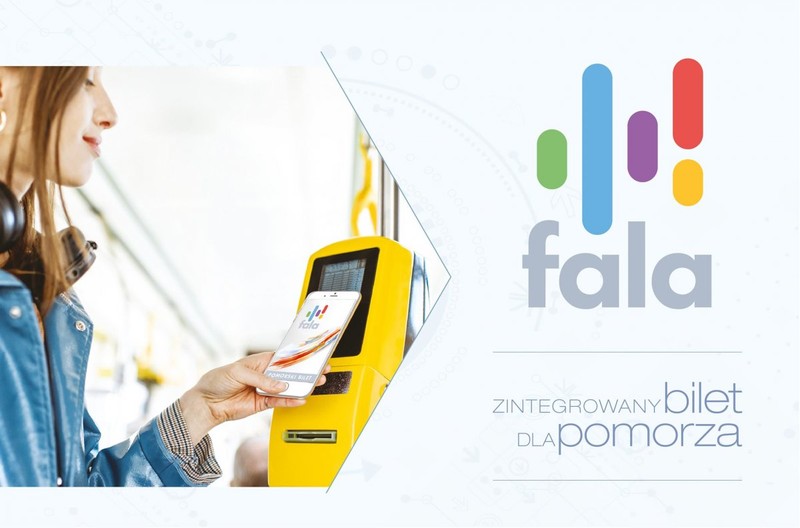 FALA – the integrated ticket for the Pomeranian Voivodeship

This year one of the most modern integrated payment system in public transport will start functioning in Pomerania Voivodeship. Responsible for the implementation of the project officially known as “Increasing the availability of regional rail transport in the Pomeranian Voivodeship through its integration with local transport” is the local company Innobaltica, the Interconnect project partner.

The total cost of the project is PLN 106,5 million, however the company was granted with PLN 90 million under the Operational Programme Infrastructure and Environment. InnoBaltica also co-finances the implementation of the described objective from other sources. As part of the Interconnect project (Interreg South Baltic program), it cooperates with Germany, Denmark, Lithuania, Estonia and Sweden to develop a model of paying for public transport journeys that will allow tourists and businessmen from all these countries to easily use public transport in cross-border traffic . PLN 6.7 million has already been obtained for this work and pilot work is currently underway to implement technical solutions in this area. InnoBaltica also obtained funding from the ELENA financial instrument in the amount of nearly PLN 10 million for technical assistance in the development and implementation of the system.

The co-financing agreement between Innobaltica and the CEUTP was signed in September 2019 during the TRAKO fair, which is one of the most important transport industry events in Poland. Krzysztof Rudziński – the Head Director of Innobaltica underlined that the system which will be implemented in Pomeranian Voivodeship is a revolution in the way local governments think about ticket integration. After several arrangements and negotiations the company found a solution which allows to gather on a single e-platform all the principles of operation of public transport of ten largest local governments in our region. None of the transport operators will loose their autonomy and yet thanks to electronic integration they will all function as one structure. The essence of the integrated mobility e-platform is the fact, that passengers will be given an advanced tool allowing for simple and intuitive use of public transport in whole Pomeranian Voivodeship.

What exactly the money will be dedicated to?

First of all the money will be used for creating a high-tech advanced system which will enable passengers in Pomeranian Voivodeship a joint trip without the knowledge of tariffs and carriers. The system will include passengers accounts, information on ticket prices, bus, tram, trolley bus, train routes and timetables. The mechanism will contain billing application enabling billing of passengers for journeys on a given route based on their identification in various means of transport. An important element of the project will also be a mobile application which will allow route planning and full calculation of transport costs for travelling with different means of transport.

The EU co-financing is to cover not only the system but also the purchase of validation devices installed at railway stops all over Pomeranian Voivodeship and at selected stations of neighboring voivodeships, in vehicles of local transport in the Tri-City agglomeration and also in Lęborg, Malbork, Słupsk, Tczew, Wejherowo, Starogard Gdański and Chojnice, issuing 300,000 cards (NFC identification carriers), organizing around 30 customer service points and finally educational & information campaign which has already been carried out in whole region.

The system is to enable passengers paying for the journey without necessity of knowing the tariffs applicable on given routes and given cities. It basically means that when getting on and off the vehicle the passenger will only have to signal his entrance to the vehicle on a special ticket validator. The electronic device will determine what vehicle it is, which carrier it belongs to, how long will the journey last and what fee needs to be charged. The superior functional features of the system are to be ease of use, intuitiveness, reliability and precision of billing.

The basic elements that both passengers and carriers will come into contact with on a daily basis will be terminal equipment (including validators) and passenger identification carriers. Validators are new elements that will appear in public space. They will be devices installed in vehicles (buses, trams and trolley buses) and at railway stops throughout the Pomeranian Voivodeship. To validate the journey passenger will use one of four identification media. You can choose from a smartphone application, a dedicated card, a credit card and a ticket with a QR code

Although a large part of the payment system service will by definition be transferred to electronic systems, passengers will be supported by Customer Service Points, which will be located in the largest communication hubs. At these points, each passenger will be able to buy a single ticket with a QR code and also obtain a reusable ID. Service point will help in setting up an account and activating the application or card.

Benefits not only for passengers

It is worth mentioning the basic benefits that the main public transport stakeholders will gain.

The main benefit for this group will be the opportunity to travel freely in the vehicles of various transport operators without having to know the ticket prices and without having cash. The passenger will not waste time looking for a cash register or a ticket sales point, as all formalities related to the travel fee will be able to be dealt with electronically. The system will not only be able to calculate and collect the appropriate amounts, but - if certain conditions are met - also optimize the tariff by adapting them to the rights of the passenger, thanks to which in many cases journey will become cheaper.

Travel planner is a tool that, in cooperation with the billing system, will allow passengers to plan their journey in various variants, e.g. including distance, price or time optimization. An important element of the travel planner will be facilities for the disabled (e.g. the ability to check without leaving home which course is served by a low-floor vehicle and how it is connected to subsequent courses of this standard).

On-line passenger information will also be constantly updated. All this will simplify the use of communication services and make public transport much more passenger-friendly than it is today.

One of the basic benefits for transport operators will be precise and automatic settlement of receipts from ticket sales. It is also assumed that the economic efficiency of subsidies for regional transport will increase as well as the automation and sealing of the payment system for transport operators for honoring statutory discounts. This is to increase the profitability and efficiency of the communication offer while maintaining the autonomous tariffs of individual organizers. At the same time, the system will enable organizers and operators to obtain detailed statistical data on transport, which in turn should translate into optimizing the layout of communication routes in the Pomeranian Voivodeship. By integrating the data, it will be possible to synchronize timetables on major transport hubs. The data obtained by the system will also be used to introduce tariff solutions to reduce road congestion in some areas of the Pomeranian Voivodeship, as well as for strategic transport planning.

The name was chosen by the residents

The new system of paying for tickets will be called FALA. Such a decision was made by the inhabitants of Pomerania, because this name was selected through a competition from among over three thousand proposals submitted.

It is worth emphasizing at this point that the councils of the largest cities in the Pomeranian Voivodeship have already adopted resolutions declaring joining a common toll collection system, as well as resolutions reserving financial resources (as part of long-term financial forecasts) for system maintenance.